“MAROONED” The wreck of the Vergulde Draeck and the abandonment and escape from the southland of Abraham Leeman in 1658 by JAMES A . HENDERSON St George Books Perth WA 1982

For many years/centuries the coast of Western Australia (Nieuw Holland) was an unwanted dangerous lee shore to be shunned by sailing ships. However in the 17th Century a growing trade between Europe and the Dutch East Indies (now Indonesia) forced ships to travel up this dangerous and unexplored coastline.

Developments in 2nd half 16th Century in navigation & mapping. 1541 Flemish cartographer Gerard Mercator produced a globe showing the parallels of latitude and the meridians of longitude, and compass roses. In 1569 Mercator’s world map was published making allowance for the convergence of the meridians towards the poles while showing parallels and meridians in proper proportion on a flat surface.

The sailing ship Gilt Dragon was wrecked off the WA coast in April 1656 on her voyage from Amsterdam in the Netherlands to Batavia (now Jakarta) in Indonesia. She carried 118 people – two months later a boat with 7 men arrived in Batavia and said that 68 survivors were onshore in the Southland.

The Gilt Dragon wrecksite lies off the coast south of Lancelin between what are now Ledge Point and Seabird.

Ships were sent as soon as possible to try to rescue the survivors but the ships arrived in the bad weather of winter months and suffered all sorts of problems including losing a party of sailors sent ashore.

The Waeckende Boey was a small fluyt a freightcarrying vessel designed by shipbuilders in Hoorn around 1594. It was designed as long & narrow with an extreme incline from the waterline to give it a narrow deck thus reducing the taxes levied on it in the Baltic where deck measurements were the critical measure. As well as the salt trade in the Baltic the design was useful in the East India trade about to develop. The Waeckende Boey was 30 metres long 6.6 metres wide and 3.3 metres depth in the hold. The Emeloordt was a galliot a fishing vessel design used for whaling and as a merchantman. The Emeloordt was probably around 22 metres long and of beam 5 metres with a cargo capacity of about 60 tonnes. Each carried 6 months provisions for the voyage.

The captain of the Waeckende Boey seems to have been a difficult personality.

Abraham Leeman van Santwits was the first officer and navigator of Waeckend Boey and he and 13 sailors were marooned on an island off the coast while trying to find survivors of the Gilt Dragon. They ate seabirds and seals to survive and dug a small well from which surprisingly they obtained reasonably fresh water to drink. This island is believed to be the Green Islets.

28th March 1658 6th day since the boat had been sent ashore with 14 crew before a storm and the ship had sailed away. They sighted a sail, lit a fire and thought they were saved but next morning the ship had gone. Leeman urged his men to make repairs to the boat including a make shift sail of seal skins. On 8th April 1658 they began their voyage home to Batavia. About 11th April they were off the northern tip of Dirk Hartog Island having covered some 30 mile but the Java coast lay another 1000 miles or more north and Batavia at least 1500 sea miles away. The story is one of extreme thirst and deprivation weakness and death. On 19th April one man died – the same day that the Waeckende Boey and the Emeloordt anchored safely at Batavia 22 days after the Waeckende Boey had sailed away from the men who had lit their signal fires on Green Islets. On 28th April they made landfall in Java on a hostile coast. 7 crew deserted here after a good drink of fresh water leaving Leeman with 3 men. The boat was wrecked and and they had to walk around the coast. However with fresh water and food a plenty they gathered strength as they went for about 5 weeks. Then conditions became more difficult and food scarce. Around end of June they were assisted by some Javanese natives and then held hostage for a time before the VOC (Dutch East India Co) negotiated their release and return to Batavia on 23rd September almost 6 months after being left by their captain. 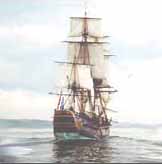