For years, committee members have spent Association funds on professional advice, legal issues, political issues, heritage listings, and on preparation for and meetings with various organisations too numerous to mention. We expect to have considerable expense achieving listing with the State Heritage body in the near future.
In addition, funds are spent on tip maintenance, settlement improvements and rehabilitation.
The office bearers and committee members accept much of the costs in getting to and from these tasks as well as giving their valuable time (which is often considerable) to attend and negotiate on the settlement’s behalf.
There are still members of the Grey community who are not members of the Association. If you have a shack at Grey but have not joined the Association on your shack’s behalf, WHY NOT???  The Association can only speak and act on BEHALF OF MEMBERS!
Please support the community in which you have an interest by paying  the $50.00 per year for your shack’s membership! Membership fees are payable to the Grey Conservation and Community Association and can be sent to the Secretary at the address on this page. Do not forget to include the number of your shack and your name and email address.

Just a few lines to ask for your support in recycling your steel and aluminum cans.

The association committee has decided, after numerous talks with various politicians and the shire, that further recycling measures should be adopted at Grey.

One of the arguments against us put forward by the pollies, local government and DEC, is rubbish (excuse the pun).

We ask you to help in this regard and separate your cans both tin and aluminum, and place them in the conveniently located bins at the tip.

This will both help alleviate another argument against us staying at Grey and Wedge, and reduce the volume of rubbish in the general tip.

If possible please take offal back out to sea as this will help minimise smell and flies at the tip. Please! “out to sea” means offshore, not just down to the beach!

The following email (edited) was received in mid-April by our President Peter Sheppard from Ross Tapper at Grey:

“G’day Pete,
Just letting you know what happened the other day after the Wedge Island Tip fire. ………We had a visit from the Dandaragan Shire’s FESA vehicle. They asked where our tip was and were directed to it. Later, Davo rang them to find out what it was about, and asked for any hints on how to best house keep the tip. The reply was that it was the best tip they have seen, very well maintained and segregated into materials. They even had their Health Inspector on board who gave it approval, so a big clap on the back for Davo should be mentioned in the next newsletter, and a call for volunteers to help in some clean up work out there. ………….Those Fridges and other heavy items are hard to move, but it has to be done to keep the place tidy. Even an emu bob around with some bags to collect the wind scattered rubbish would be a help,
Cheers Rosco

P.S. It’s good to have some good publicity sometimes.”

As Ross said the general appearance of the settlement is important. Your committee would like to invite everyone to a Busy Bee at the tip, on Sunday 6th June 2010 at 3.30pm for a general tip and area clean up. Please bring your own gloves, rake, plastic bags and trailer if you have one.

A Dune Re-vegetation field day will be held on Saturday the 22nd of May 2010. Please meet at 8am at the dune. Activities will include planting and fence erection.

Has begun and with it an increase in activity at Grey. This newsletter contains excellent and timely information concerning fire and bush safety. Plus a report on the fabulous work that Peter Sheppard has planned, sourced and executed on rehabilitating the southern dune. If you can access the web, check out the progress made on the Southern Dune page and more detailed safety information on our web site: www.grey.asn.au The committee of Grey would like to extend seasons greetings and wish all a prosperous new year in 2008. Happy shacking.

A very persistent rumor has been circulating that we are to be given a 21 year lease. The rumor reached the point of belief that a proposal is sitting on Mr Myercourts desk. We regret having to tell you that THIS IS NOT TRUE. The man himself when questioned by one of our committee stated that:  “he has NOT told people we are getting a 21 year lease but that we are pushing for a 21 year lease based on the leases granted in Tasmania”. He claims “people hear what they want to hear and that it is just wishful thinking at this stage but we and Wedge Island have proven we can be quite persuasive in the past and it is expected we will be lobbying strongly in 2010 to get extensions to the existing
lease which expires in 2011”.

However, you can rest assured that DEC will fight to the bitter end to ensure that we are eradicated and without political command to allow us to stay, we will be demolished. Your committee remains dedicated to ensuring the settlements continued existence and will pursue every avenue open to us. The current aim of your committee is not as Mr Myer court states. We are still looking at a number of proposals and a 21 year lease is amongst them. Politicians hold the key to our survival. It is they (Everyone Henderson in particular ) who created the six year plan so many years ago.
It is they who have amended it to create our current lease arrangements. Throughout the whole negations DEC has steadfastly resisted any proposal for any extension of our stay. There is no indication that they will not continue to do so.

It is proposed to erect a monument to those who have had their ashes spread at sea around Grey. There is little more that can show the deep love of a place than requesting your ashes be spread in the area. There have been several of our community leave this way and we believe that a form of recognition is worth while.
It is proposed to erect the monument close to the boat launching site and have individual plaques for each person. If you are aware of a person who requested his/her ashes be cast in the sea or on the land at Grey would you please send me the following details: The full name of the person, their date of birth and death, any other comment. Even if we are eventually demolished, the spirit of those who loved their shack and its community will live on as it would be very difficult for for the Authorities to destroy a monument of this type.

The political fight to stay is similar to the fight against the current position of the Exclusion Zone created around Green Island. We simply did not make enough noise when it was fi rst proposed and once in place it will be very difficult to change. I attended a meeting where the marine park was discussed and was enlightened to hear the authorities say that they took whatever area they could get away with. Even if it was not what they wanted, it did not matter as at the next review they would expand the zones further if given the opportunity.

There will eventually be a review of the marine park and I have absolutely no doubt, they will attempt to expand it.
In the last newsletter it was asked that you write to Calm expressing reasons why the current zone should be changed. Please make the effort and write. If you don’t they will simply leave it as it is and expand it if they can. An element of public displeasure over the current zoning may help your committee argue against further expansion when the time comes.
Do nothing and we will all lose.

For many years, beaches around the settlement were subject to netting. This had a nasty effect on the number of mulloway and tailor available for the beach fishermen*.
In recent years, this has stopped and both the numbers of fi sh caught and the number of months in the year they are caught seem to be increasing. However, with the ever increasing restrictions on the beaches South and further North of our settlement, the beach immediately
South of the bay is coming under greater fishing pressure than ever. More fishermen forced into a smaller area will take its toll even if fisheries rules are obeyed.
Overall, the bulk of the beach fishermen at Grey are either shack owners or their guests. 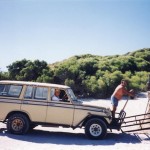 PLEASE
Obey the fisheries rules and take your litter home with you.
Look after our resource and our beach.
We can do this.
*Fisher women,  fisher children and fisher persons, please do not be offended by the use.

The tip has not been burnt this year, due to a number of reasons it has not been possible. Please take extra care when putting your rubbish in the tip. If you get Children to do it, please instruct them carefully to do as any signage directs. The tip can get out of hand very quickly and it takes a lot of effort to deal with rubbish which is not dealt with properly.
If necessary, a busy bee will be organized over the Easter period.
Watch the notice board for details.

Please look after your tip.